The 7 hills of Lisbon 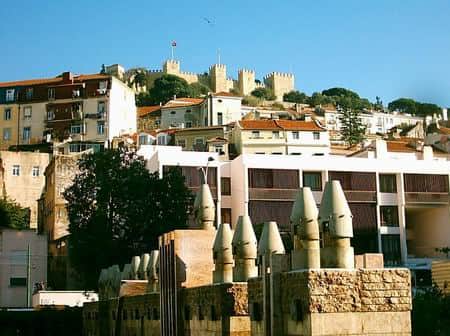 You will often hear of Lisbon being referred to as the “City of Seven Hills”, people talking about the seven hills of Lisbon or, in Portuguese, “as sete colinas de Lisboa”. Even the local transport companies use a rechargeable ticket called the “7 Colinas” ticket.

But how true is this description of the city? Well, Lisbon certainly has a number of hills but as we will see, limiting them to seven is largely based on myth and we can perhaps relate the number to Greek legend, snakes and serpent power, and even Hindu chakras.

To do this, we must start with the story of how Lisbon was founded. According to Greek legend, Ulysses visited Portugal during his travels and here founded the city the Greeks called Olissipo. These ancient Greeks knew Portugal as Orphiussa (Land of Serpents), a name also given to the Cabo de São Vicente cape and a Serpent-Goddess with whom Ulysses supposedly fell in love.

When Ulysses left Portugal in the Argos to return to Troy, the Serpent-Goddess Orphiussa shook with such anger that the tremors affected the land around the Tagus estuary and the seven hills of Lisbon were formed, giving us the snake connection. In English, the term “Serpent Power” is often used to refer to traditional chakra doctrine and Kundalini yoga, Kundalini being a corporeal energy and often envisioned as a goddess or sleeping serpent, and closely linked with the chakras or energy centers, the major ones of which number … yes, you guessed it … seven.

So the number 7 has long had a certain symbolic and mystical aura about it, and probably this was increased in the Christian world due to the reputation of Rome being the original city of seven hills. And possibly the Romans stationed in Lisbon during their occupation of the city saw some similarities between the 2 capitals. But in fact there are many cities claiming to have been built around or on 7 hills – at the last count, Wikipedia was listing more than 50 such locations amongst which we can highlight Jerusalem, Istanbul, and Budapest, apart from the aforementioned Lisbon and Rome.

The first mention in writing of Lisbon’s hills was made by the 16th Century Portuguese philosopher Damiao de Góis (although, rather inconveniently, he mentioned only five). Then finally, in 1620, we come across the famous seven hills when Frei Nicolau de Oliveira, a friar who taught in the Trinidade Convent, wrote “O Livro das Grandezas de Lisboa”, or the “Book of Lisbon Grandeurs”. Here he famously cites Lisboa as being seated on the seven hills of Castelo, São Vicente, São Roque, Santo André, Santa Catarina, Chagas, and Sant’Ana.

But in his haste to link Lisbon with the Holy City the good Friar completely missed another famous hill (and in fact Lisbon’s highest!), that of Graça, which perhaps he didn’t know about because it can’t be seen when arriving in Lisbon by sea, hiding as it is behind the hill of Castelo. So in fact even in the 17th century, there were at least 8 Hills of Lisbon, and of course over the years as the city grew, more and more hills found themselves within the city limits.

In any case, the oft referred to and famous 7 Hills of Lisbon are as follows:

Colina de São Jorge (or Castelo). The highest of the seven, covering the districts of Mouraria, Castelo and part of Alfama. Lisbon’s castle overlooks the city from on top of this hill, and it is here where Lisbon’s first inhabitants are thought to have settled. On this hill and under the castle, remains of a Roman Oppidum or settlement have been found.

Colina de São Vicente.  This is where the Convento de São Vicente de Fora Monastery stands and is also the location for what is commonly thought of as Alfama.

Colina de Santo André. It is said that D. Afonso Henriques installed his troops on this hill to attack the city during the Siege of Lisbon. And in the 16th century, Lisbon’s nobility and rich installed their palaces here in a search for the healthier climes and air of the hills. The main street of this hill is the Largo da Graça.

Colina de Santa Catarina. This hill is located from the Largo Camões to Calçada do Combro, near the Bairro Alto. The hill was also given the names of Senhora do Monte or Santa Catarina do Monte Sínai, after Catherine of Alexandria.

Colina das Chagas. The name comes from a church built here by the sailors who worked the route to India and makes reference to the five sacred wounds of Christ. The main street here is Largo do Carmo.

Colina de Sant’Ana. This hill is located to the West of St. Jorge’s Castle and is more or less defined by the Rua de São José and Rua das Portas de Santo Antão streets, the Rua da Palma and Largo do Martim Moniz streets, and the Praça da Figueira square.

However, even when arriving in Lisbon by plane with the privileged view which that gives us of the city, it’s difficult to distinguish these seven hills – you just get the idea that Lisbon is quite a hilly city.

But this is basically all you need to know as a tourist visiting Portugal’s capital – that to visit some of the sights like the castle you’ll need to do some uphill walking. But once you’re at the top, we can promise you the view is well worth the effort!