But in fact, Lisbon has never been declared or confirmed as the capital in any official document, unlike most other capital cities. It simply became the de facto capital when in 1255 Alfonso III of Portugal moved the court to what had become Portugal’s largest and most important city.

2. Lisbon is older than Rome

And according to most estimates, around 4 centuries older. It is, in fact, one of the oldest European capital after Athens, many historians believing that it was settled by the Phoenicians around 1200 B.C., and who used the excellent transport possibilities offered by the River Tagus. One of the theories for the origin of the name Lisbon is that it came from the term “Allis Ubbo” or “safe harbor” in Phoenician.

3. The flag of Lisbon flies over the city of Ceuta

Ceuta is located in North Africa, surrounded by Morocco, but is in fact officially part of Spain (comparisons with Gibraltar should not be made in the presence of any Spaniard 🙂 ). The first flag to fly over the city, and still used to this day, was Lisbon’s black and white gyronny (a shield divided into 8 triangular parts), due to the fact that the Portuguese occupied Ceuta in 1415. Not only that, Ceuta’s Coat of Arms is, in fact, that of Portugal! There have been slight changes over the years, but the similarities still remain, as can be seen above. As an aside, the black and white colors in the flag, and also used in the omnipresent Calçada Portuguesa of Lisbon’s pavements, is said to originate from the black religious attire worn by St. Vincent, the city’s patron saint, and the white robes worn by the Christian Crusaders. 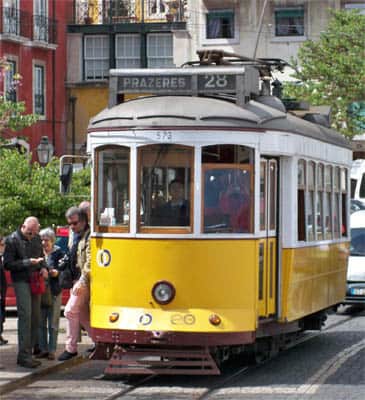 4. The typical Lisbon tram is in fact American

Although their origins can be traced to industrial horse-drawn trams in the UK, the first passenger streetcars were built and introduced in the U.S. in the 19th Century. They were pulled by horses and some of the first routes were in Harlem, New York, and New Orleans. The rails were initially installed above ground level on top of the street surface and were the cause of many problems and accidents to pedestrians.

They were then replaced by grooved rails which exist to this day. These rails are called “carris” in European Portuguese, and this is the name given to Lisbon’s public transport company that operates the trams today. Due to their origins, Lisbon’s trams were originally called “americanos” and the first operational route was inaugurated on 17th November 1873, running between the “Estação da Linha Férrea Norte e Leste” (now known as Santa Apolónia) and the “Aterro da Boa Vista” in Santos.

5. One of the city’s best attractions is one you’ll (probably) never see

(And so there’s no photo 🙂 ) The “galerias romanas” or underground Roman galleries, said to be a portico crypt from the reign of Augustus (1st century BC to 1st century AD), are located in the Rua da Prata in Lisbon’s downtown area. They are particularly difficult to see, however, because they open for public viewing just once a year, normally in September. This is because they are almost impossible to access, much of the area being flooded, and it takes anything up to a month of work by specialized personnel to prepare this monument for public access. Naturally, during the few hours, they are open, enormous queues form and waiting time can be up to 3 hours. And access is made via a hole in the ground, located in the middle of the street and while cars and trams are passing by all the while. Well, at least the entrance is free!

Added: This video is from the Portuguese version of the History Channel. Even if you don’t understand Portuguese, it gives you a good idea of what the Roman Galleries look like and how you access them… 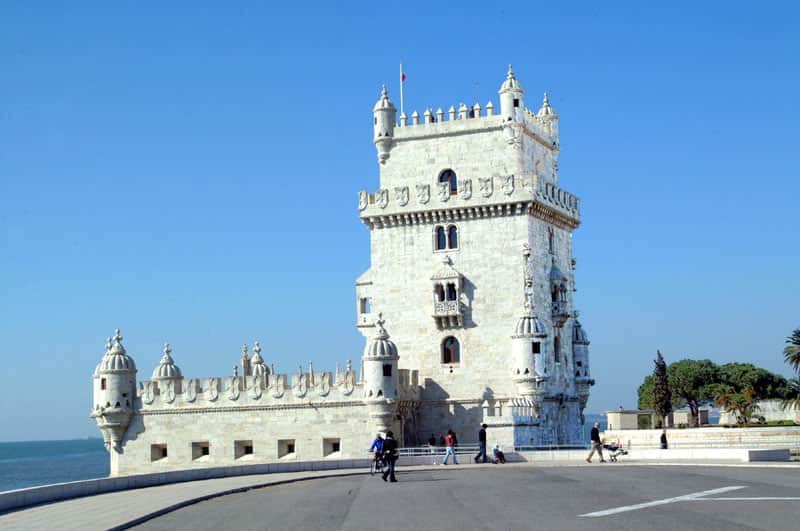 And also a jail. And also a lighthouse. And also a telegraph post. The Tower of Belém, whose construction was initiated in 1514, is arguably Lisbon’s best-known monument and was chosen as one of the Seven Wonders of Portugal in a warm-up ceremony to the election of the Seven Wonders of the World in Lisbon in 2007. A World Heritage site, it serves as a legacy to Portugal’s glorious Age of Discovery and together with the Jerónimos Monastery helps make the beautiful Belém district one of the most visited in the city.

What ignoble beginnings then for this majestic monument!
OK, it’s true that it did originally start out as a defensive tower, guarding the entrance to the River Tagus and located off-shore totally surrounded by water (the riverbanks have shifted since then). But according to many historians, the tower’s height and lack of integration into the surrounding landscape indicates that it perhaps was always meant to be a customs outpost. Its gunpowder storerooms were used as dungeons for political prisoners during the reign of Philip II of Spain, and in later centuries it served Lisbon faithfully as a lighthouse and telegraph tower. Today, what was originally seen as a fearsome and aggressive construction is a cultural reference and loved by all who visit its ancient sculpted walls.

8. Alfama, traditional Old Town district of fishermen and sailors, was, in fact, an aristocratic spa-like retreat

You probably know that Alfama is Lisbon’s oldest district. You may have heard that it was the only district of Lisbon that survived the 1755 earthquake intact and of its reputation as the traditional neighbourhood of the poor, with a village-like atmosphere. But did you know that during muslim rule the western side of the “bairro”, around the São João da Praça street close to the Sé or Cathedral, was known as “Alfama do Alto” or High Alfama, and was inhabited by nobility and the rich? Since the origin of the name is al-hamma, Arabic for baths or fountains, it is likely they took full advantage of the local springs to maintain their health.

During the Middle Ages, the rich moved out, leaving the entire district to the inhabitants of “Alfama do Mar”, the area occupied by the fishermen, sailors and the poor. The local waters were channeled into public fountains or “chaferizes” (Chafariz de El-Rei is one such public fountain and Chafariz do Dentro is a street in Alfama), and had temperatures of up to 20ºC. As such, they were also used for public baths from the 17th to century to the start of the 20th Century, being classified at the end of the 19th Century as medicinal-mineral waters. Today the public baths are closed, but many of Alfama’s old houses and picturesque squares are being renovated, making it one of the most attractive areas of the city both to live in and to visit. Perhaps one day Lisbon’s aristocracy will return here? 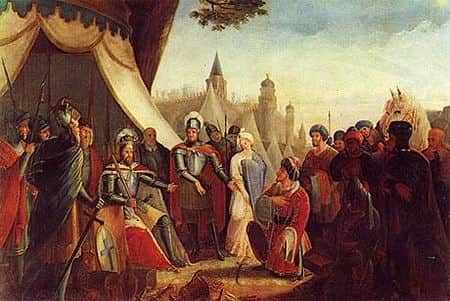 Huh? So how’s that then? Well, the Siege of Lisbon occurred during the Christian Reconquest sweeping through the Iberian Peninsula, and was one of the most important battles during the Second Crusade, and in fact one of the few Christian victories during that time. The Crusaders sailed to Portugal with the intention of ousting the moors, but bad weather forced them to land at Porto, where they met with King Afonso I, Afonso Henriques.

Having joined forces, they put Lisbon under siege and the moors eventually surrendered 4 months later. Portugal at this time was an independent Kingdom in the north of the country, having previously broken off from the Spanish Kingdom of Leon. Before that, Portucale was a Suebic Kingdom covering the north of Portugal and Galicia, then also the first county (Condado de Portucale). The name derives from the Latin “Portus” or Port and the Greek “Kalós” or beautiful. Another theory mentions that Cale or Gale was the ancient name of Vila Nova de Gaia (located in the Porto district), coming from the Celtic “Gale” which means foreign, and possibly originating with the Gallaeci tribe living in this area. In any case, the King of Portugal invaded and conquered Lisbon, and soon after ordered the large Mosque, called the Aljama, turned into a Cathedral, becoming Lisbon’s famous “Sé”.

Finally, this last fact is, in fact, a potpourri of facts about Lisbon. And that’s a fact!

– The Tagus is Iberia’s largest river and its estuary at Lisbon, up to 14Km wide, is said to be large enough to contain all the warships in the world.

– In previous centuries, one local tradition was the precursor to the current fads of naturism and nudism: for their weekly baths, people descended the steps of the Praça do Comércio to bathe nude in the river, causing scandal and indignation at the time.

– The Lisbon Half Marathon, held every year in March, is one of the most attended events of its kind in the world.

– Lisbon is ranked number 1 in the Portuguese most liveable cities survey published yearly by Expresso newspaper.

– Lisbon has one of the mildest climates in Europe. The city is sunny throughout the year, with an annual average of 2900-3300 hours of sunshine.

– Lisbon’s Vasco da Gama Bridge is the longest bridge in Europe. The world record for the largest dining table was set when some 15,000 people were served lunch on the bridge as part of the inauguration celebrations.

– The largest temporary stage in the world, at an incredible 7,276 square meters, was set up at Lisbon’s Benfica Stadium to host 2007’s Seven Wonders of the World declaration.

– The city’s spectacular Aqueduto das Águas Livres, the aqueduct which still brings water to the ancient fountains of Lisbon, has the highest ogive arch in the world, standing 65 meters high and 29 meters wide.

– The Santa Engrácia church is in the Guinness Book of Records has had the longest construction time of all churches: it started in the 17th century and only in 1966 was the last dome completed.

– The Benfica football club is listed in the Guinness Book of Records for having the largest number of fans for anyone football club: an estimated total of 14 million worldwide and over 170,000 registered to pay supporters.

– The Largest Human Logo was made up of 34,000 people and formed part of Portugal’s successful bid to host the Euro 2004 soccer championships. They also completed the Largest Football with a diameter of 19 ft 10 in (6.06 m)!

– The Largest Human National Flag was created in 2006 at Lisbon’s national stadium by 18,788 people

– Lastly, the Longest Mexican Wave involved 8,453 participants and was organized at the Parque das Nações in Lisbon, on 12 August 2007.